Health Care For All NC began in a living room in Durham, North Carolina, in 1994.  Dr. Carol Kirschenbaum gathered with several physicians interested in universal health care. They knew well about health care inequality and wasted health care dollars. The small group met monthly and formed a chapter of Physicians for a National Health Program (PNHP).

In December of that year, the NC Health Planning Commission released a landmark report that highlighted that more than 900,000 North Carolinians were uninsured and outlined the potential savings in both lives and dollars with a single-payer system. Even without single payer, with some fundamental reforms, there could be significant savings and waste reduction.

It soon became clear that the organization needed broader representation than doctors alone. In 1997, the group followed a Massachusetts example and took the name NC Committee to Defend Health Care.

For the next period, organizing and education centered on using the Health Planning Commission report as a rational framework to promote health care as a right and legislation that the right to health care be written into the State constitution. There was a period of intense activity with the election of Verla Insko to the NC House in 1997 and strong support from Dr. James Bryan, then president of the NC Medical Society. In 1999, NC Rep. Insko filed a bill that would guarantee the right to health care for North Carolinians.

The NC Committee continued to meet monthly in the Triangle. Across the state, they put on public events, attended community fairs and presented at church meetings. There was lobbying in Raleigh along with press conferences to get media attention. The group grew beyond physicians, and gradually won endorsements by more than 70 local and state organizations for the “right to health care” and for a constitutional amendment.

The Committee also matured as an organization, adopting bylaws and electing officers. Sadly, founder and leader Dr. Kirschenbaum passed away in June 2005, but the organization she founded carries on.

The IRS granted us full 501(c)3 status in 2006 and two years later, the group officially changed its name to Health Care For All NC.

More than 25 years after its founding, Health Care For All NC continues to fight for single-payer health care, including its most recent incarnation, Improved and Expanded Medicare for All.

Here are some of the highlights: 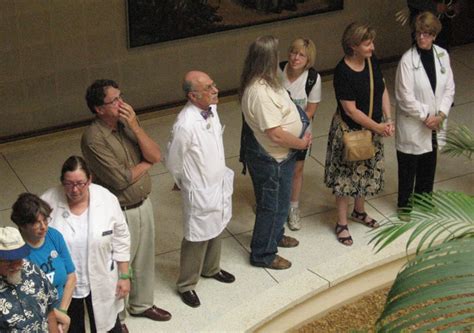 When NC NAACP President Rev. William Barber put out a call for health professionals to gather in Raleigh to denounce the draconian policies of the General Assembly, members of Health Care For All NC answered the call. As part of his involvement in the movement, Dr. Jonathan Kotch engaged in civil disobedience. 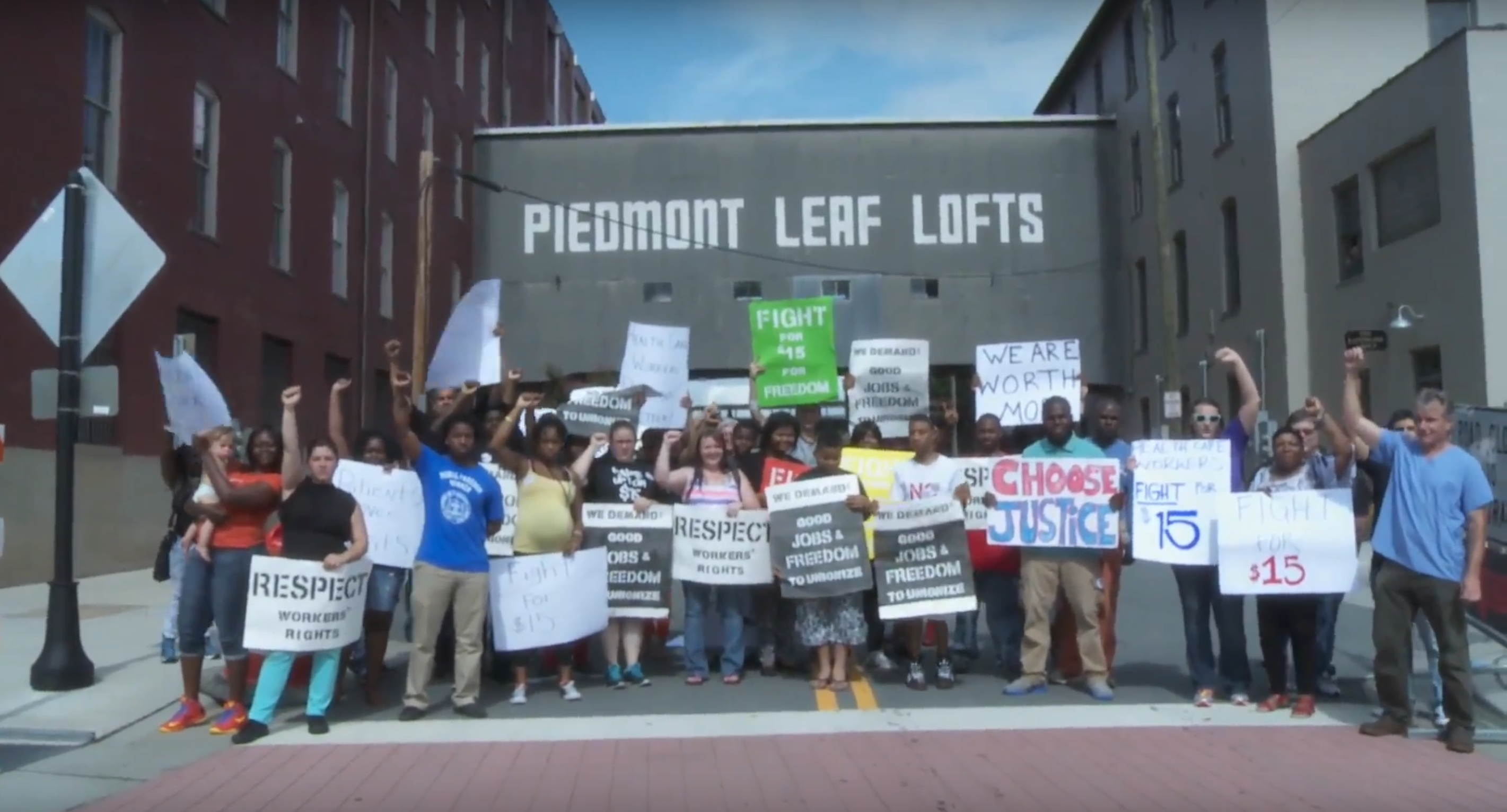 In an attempt to unionize workers at Forsyth Medical Center in Winston-Salem, Health Care For All NC board members organized a speak-out and march tying workers’ rights to the need for a national health program. The workers at Novant Health who were most exploited were uninsured and being paid poverty wages.

You can watch a video of the speak-out here. 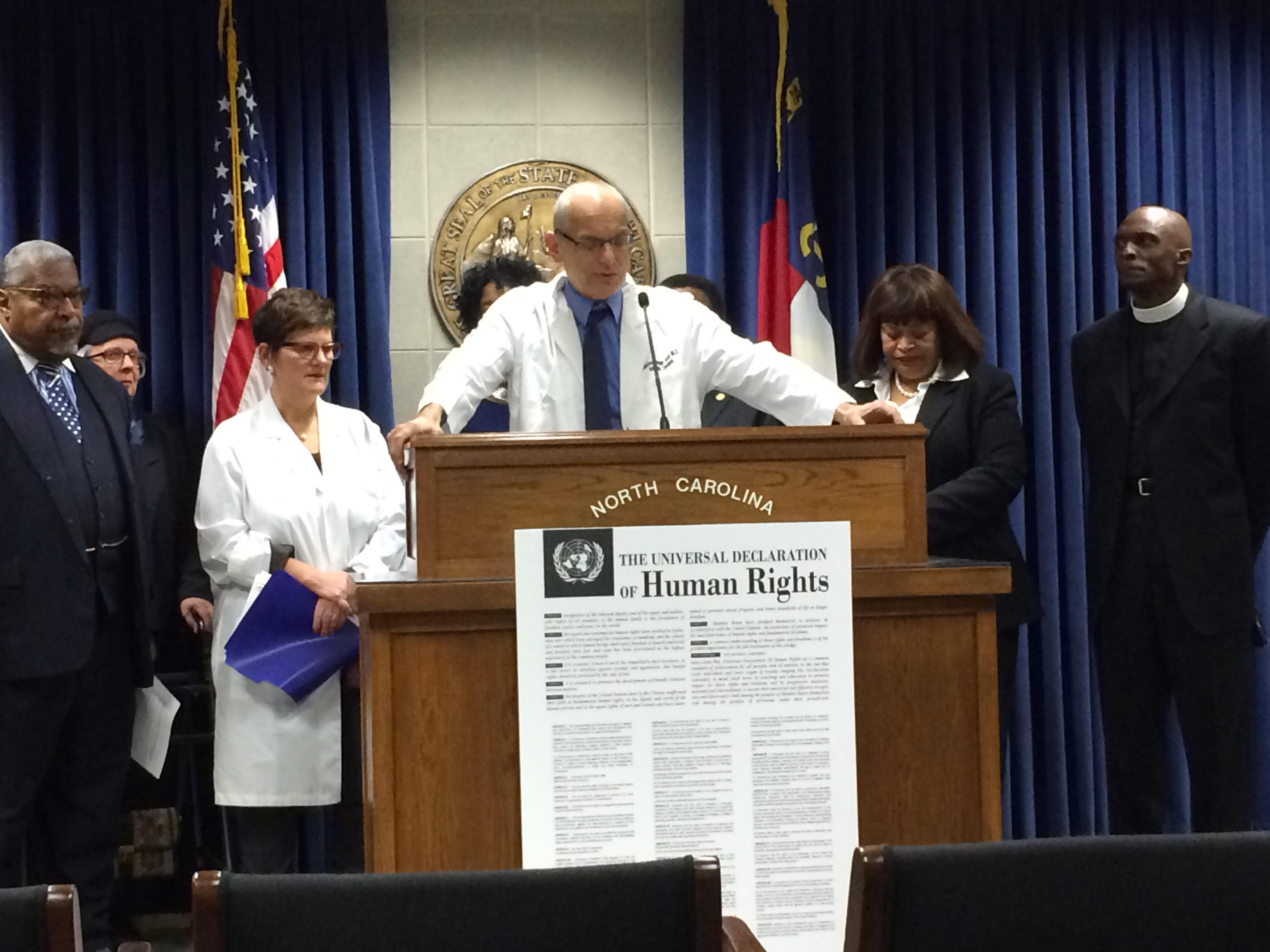 Health Care For All NC members organized a press conference on Human Rights Day to address the North Carolina legislature’s violation of Article 25 of the U.N. for its refusal to expand Medicaid to 500,000 North Carolinians.

“Is Another World Possible? Beyond War, Sickness and Environmental Catastrophe” (November 2015)

Health Care For All NC co-hosted a panel discussion at Guilford College focusing on a future with single-payer healthcare and without war and state violence; a world that puts people, peace and the planet before profit. 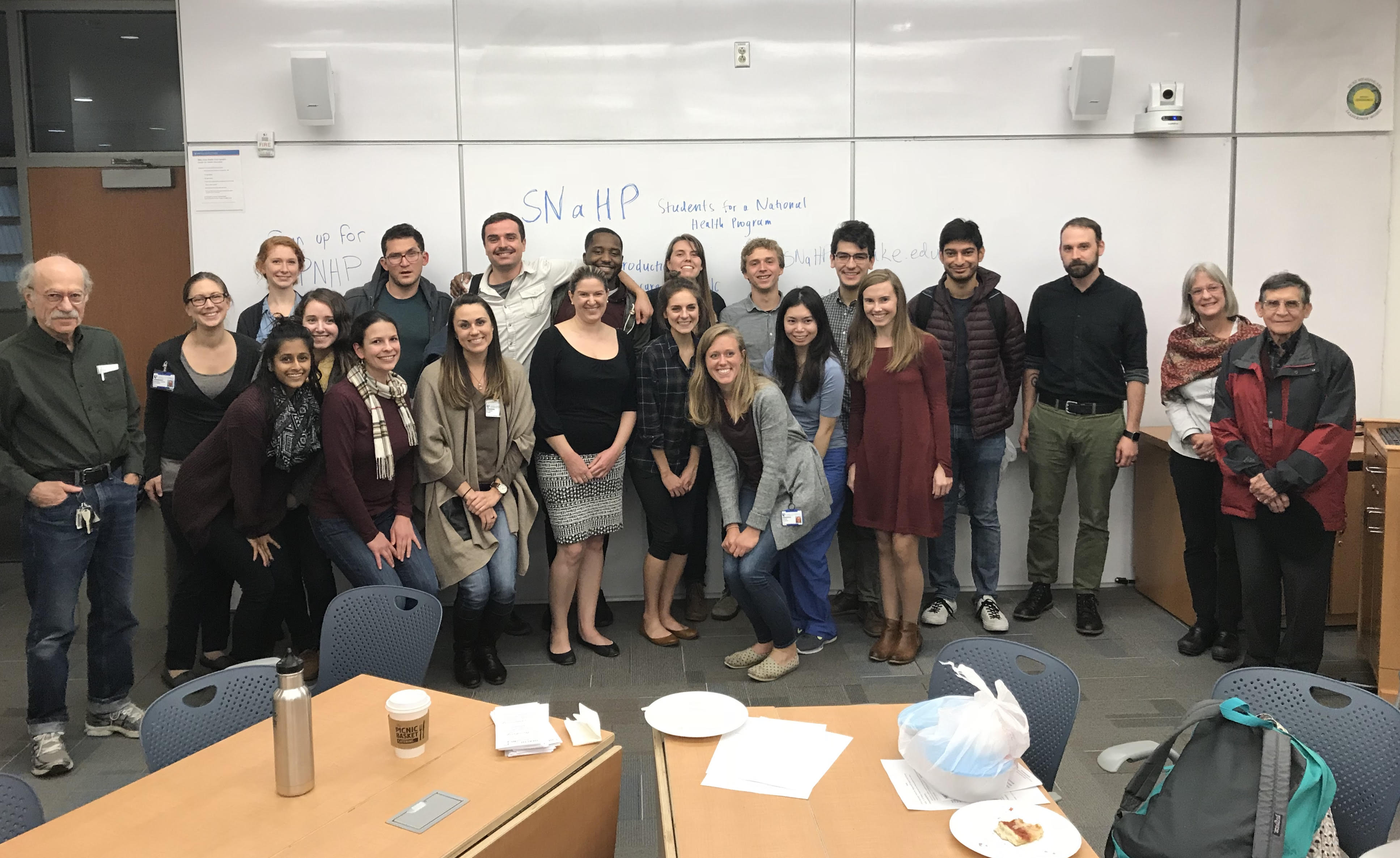 Medicare for All Rally in Durham (January 2018)

Health Care For All NC and other coalition partners organized a Medicare-for-All rally attended by groups from across North Carolina, including the Winston-Salem DSA and the NC Council of Churches. 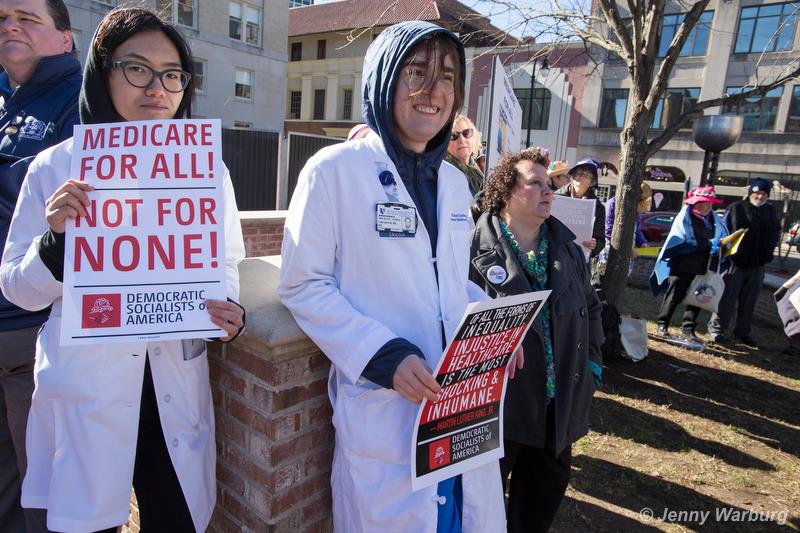 Members of the UNC chapter of Young Democratic Socialists of America, Students for a National Health Program (SNaHP), Health Care For All NC and Health Care for All Ya'll sponsored a strategy session for building a statewide coalition for Medicare for All.

Health Care For All NC members put out a call in support of a national day of action organized by White Coats 4 Black Lives against police killings of African Americans. The die-in was conducted by Winston-Salem State University students who wanted to call attention to the killing of Edward McRae.

Graduate students create a SNaHP chapter at UNC-Chapel Hill in order to bring more attention to single payer at the university. 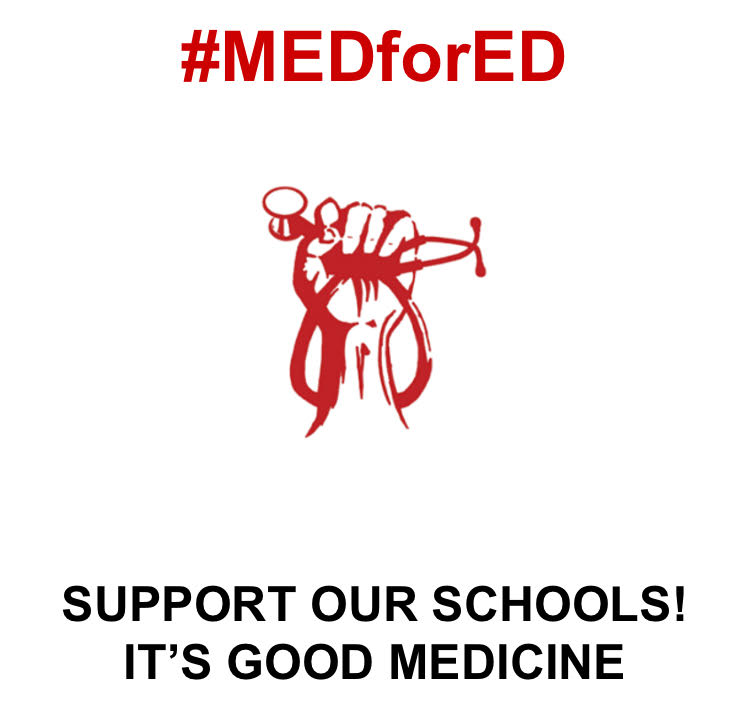 #MedForEd day of action in solidarity with NC teachers (May 2018)

Recognizing the important role that healthcare played in the wave of teachers’ strikes across the country, Health Care For All NC spearheaded a campaign to support educators. As healthcare professionals and advocates fighting for a universal, single-payer health system, we believed the purpose of both healthcare and public education is to serve the common good of the community, not the bottom lines of corporations.

Health Care For All NC member Dr. Elaine Greene facilitated and organized a meeting with Dr. Karen Schooler, president of the Greensboro Medical Society, to ask if the organization would endorse Medicare for All, which would be the basis for collaborating with them on future events. 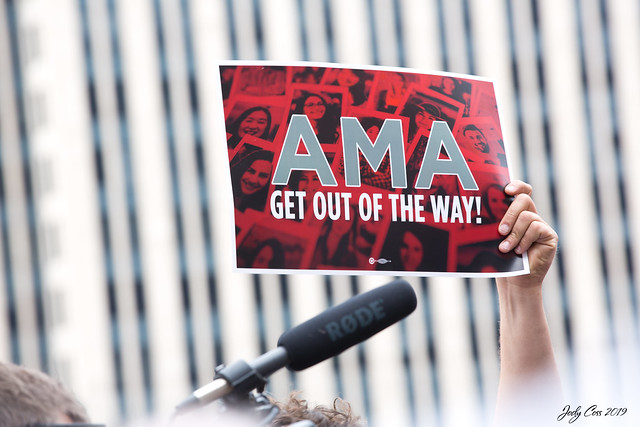 Health Care For All NC members initiated and spearheaded a campaign to pressure the American Medical Association to divest from Partnership for America’s Health Care Future, a dark money group devoted to crushing the Medicare for All movement. From North Carolina, A national coalition was organized and coordinated from North Carolina. Coalition members included PNHP, National Nurses United, People’s Action, Public Citizen, The Center for Popular Democracy.

The campaign culminated with a march and rally of 500 people from around the country at the AMA’s annual meeting in Chicago. Speakers included PNHP President Dr. Adam Gaffney and Senator Nina Turner. The campaign garnered national news coverage and led to the AMA’s withdrawal from the Partnership for America’s Health Care Future.

You can read Jonathan Michels' analysis about the campaign and the AMA’s withdrawal from the Partnership for Jacobin Magazine here.

Medicare for All People's Assembly in Durham (August 2019)
Members of HCFANC planned and hosted a mass community meeting for people to share their experiences with our broken healthcare system. The event was also to inform people about Medicare for All and to mobilize support for HR 1384. 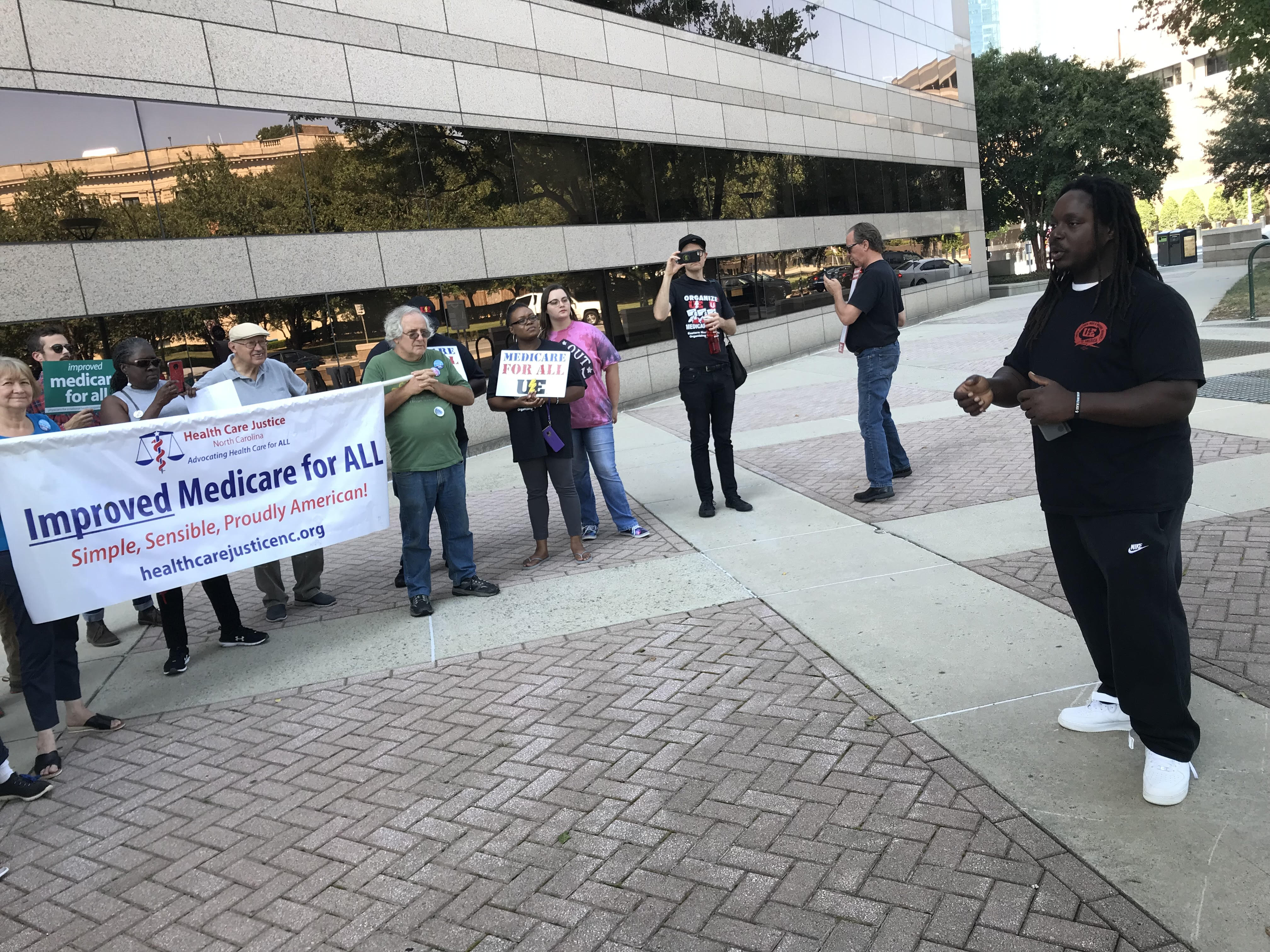 Southern Workers Assembly Medicare for All rally in Charlotte (September 2019)

Health Care For All NC members participated in the SWA’s Workers School as they discussed a campaign to rally workers around Medicare for All.

Medicare for All People's Assembly in Greenville (October 2019) 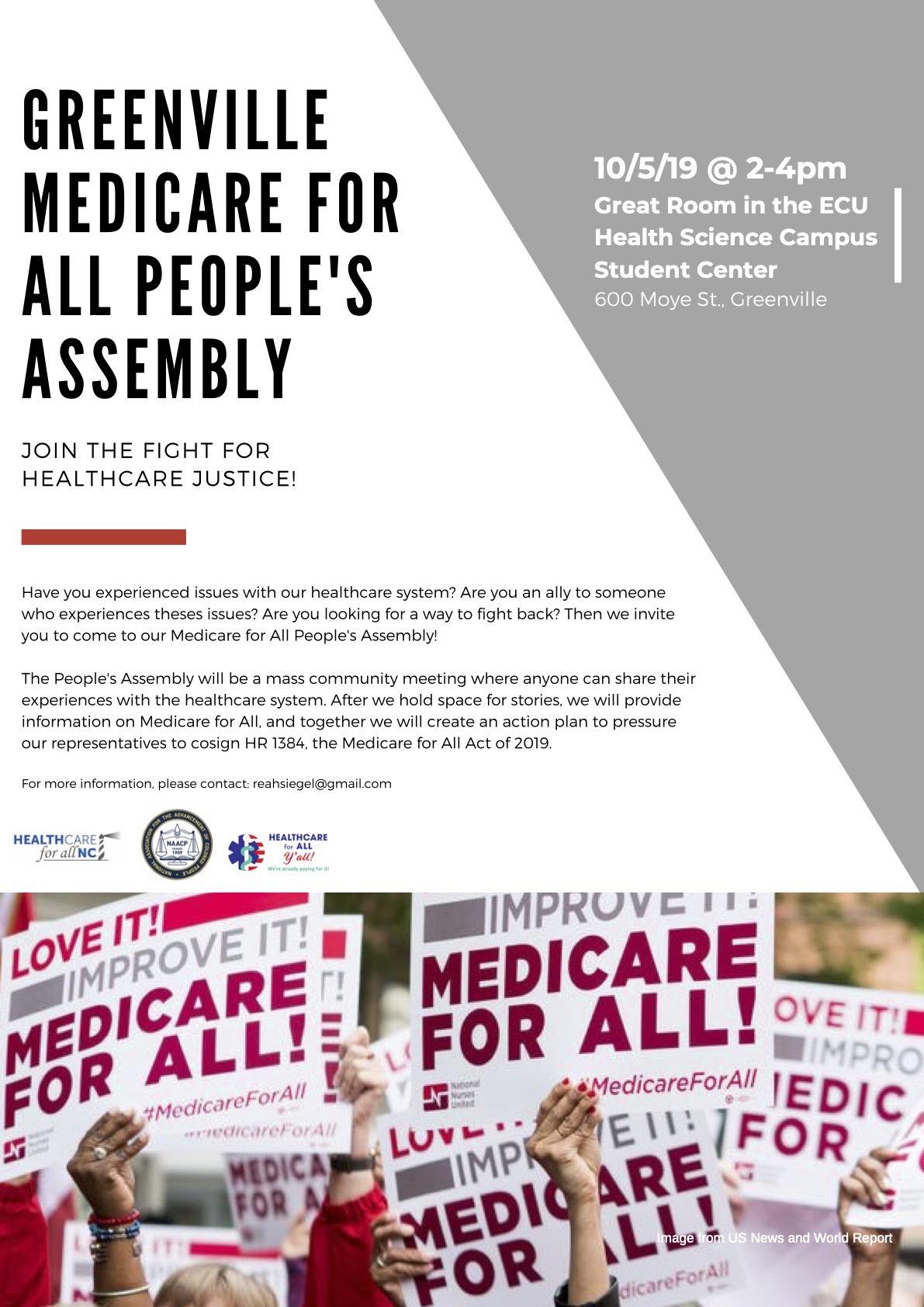 Many familiar faces gathered in Greensboro for the first meeting of the NC Medicare for All Coalition. The coalition has grown to 40 partner organizations!